Home » Fiction » A Hope And A Future 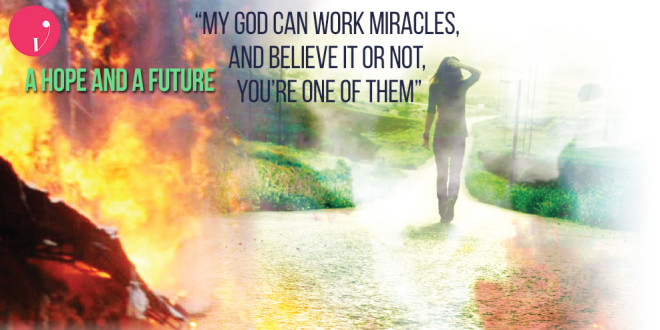 A Hope And A Future

Things I thought I knew, places that held joyful memories. People whom I loved, people close to me, were all gone.  Terrorists’ Attack!  The very word sends a chill down my spine. These heartless Mumbai Attacks in 2008 have devastated my life! I, Shanthi, am now an orphan, living nowhere. All around I see, rubble, ruins only! Happiness and joy are now far out of reach with no hope and no future. Well, that’s what I thought…

There was one who proved me wrong … John. We met accidentally along with many other mourners. He started a conversation. He was smiling, actually smiling in the midst of all this.  He came up to me and said “It’s a beautiful day, huh!” Now that just confirmed my suspicion…he was crazy. “Well I don’t see anything beautiful about it,” I replied. He shook his head and smiled again. “Well things could be a lot worse. I mean it could be raining and this place could get flooded and this time there would be no Noah’s Ark.

“Well considering that we were just attacked within the last 24 hours, leaving blood, rubble and tears behind, the weather looks great” I said sarcastically. He smiled again.

“My God can work miracles, and believe it or not, you’re one of them”

“How can you smile?” He looked at me and smiled…again. He then said the most peculiar thing.

“You look at the world and see no hope, right?”

I looked at him, questioningly. “Doesn’t everybody?” I said.

“I don’t,” was his immediate reply “So you look at the world and see hope in it?”

“Yup, there always is. You just have to look for it”

Now that took me quite some time to let it sink in. When I finally absorbed it, I said “Like…?”

He smiled again and said “look…” pointing to a man and a girl “father and daughter.”

I looked at them, and said, “But they are crying.”

He looked at me and said “together…”

“So…things could be a lot worse?”

“Things could be a lot better” He looked at me and said “You’re one of those people who think the glass is half empty aren’t you?”

“I suppose that’s what such devastation does to you.”

I took another bite of my food and thought…he’s right.

“What makes you look on the bright side?”

“He does not keep his promise to care for us.  Just look around.”

“Then you’re blind” and I walked away. My appetite left me, so I gave my food to a small boy. The smile on his face and the gratitude in his eyes made me feel warm inside. I turned around and was about to leave, when I saw John again.

He said “Look… I know life is tough but if you give up on it, there’s no way it’s going to get any better”

“Life…is huge with a variety of different things in it. Though things seem useless it has got a purpose” He looked up at me too see if I was still following. I nodded.

“ There is a bigger plan, a bigger picture,” I stopped him there, “ I’ve heard all of this before and I don’t think what you’re going to say will make any difference… you can say I’m lost forever.”

“NO, NO!!! I do not think so….if you know all the answers why don’t you believe?” he asked me in a soft voice.

“I don’t believe because so many innocent people, including my entire family, are killed.” I retorted angrily.…” the memories of that day choked me, tears kept flowing, and I made no effort to stop them.

John put his hand on my shoulder and said “I’m sorry…” in a gentle voice.

“So you blamed God?”

“ He does have control of our lives…”

“To give up is the easiest thing to do, clinging on is the challenge.”

“When you believed in him did you really give him a chance?”

Thinking about the past open wounds, I tried to conceal them. The past was never easy for me. After a long pause I looked at him and said “I gave him a good enough chance…” I then saw his head drop, not in frustration or unbelief, but as though pleading in prayer. Then he looked back up to me. I was convinced nothing he could say could change the past and heal my wounds.

He then asked me “Were you happy then?”

“Happy at times, however more sad and hopeless.”

“’Hopeless’ is a strong word…do you really mean it?”

“ Yes!” My reply almost burst out but I stopped myself and thought about it. Even though at times I was hungry because there was not enough food to go around, I learnt to get by. I had a few friends who saw me behind the big eyes…we had fun together…prayed together…and now they are all gone… gone forever…but then I used to smile and laugh much more.

“No” I replied “not hopeless”

He looked at me and asked “And now?”

“Now it’s hopeless!” I really meant it. There was a long pause. Then he finally said “Is that what you really think?”

“Yes, but I can tell you God’s not going to do anything about it!”

He smiled again. After all this time I was still not used to him smiling.

“And you are convinced about that?”

“Well my God can work miracles, and believe it or not, you’re one of them.”

“It wasn’t meant to be flattering, but it is true. In these conditions very few survive…you’re one of them”

He got me there and I wasn’t going to show it. “Depending on how you look at it.”

He dropped his head again, the same way he had done before…like he was praying.

Somebody came up to him and said “John, it’s time to leave for the prayer meeting.  Are you coming?”

John looked at me and asked “Do you want to join us?” I shook my head. He finally said “We can go round and round this, but I could never convince you…only God can, and he’s got his ways, strange ways at times.”

He got up to leave and said “I’ll pray for you, good night!” he said with a smile.

My eyes followed him till he was out of sight and…I smiled.

2015-12-03
Juliet Thomas
Share
Previous Where Are You Going?
Next Essence of Life 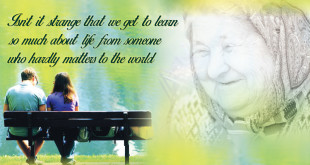 The small winding road seemed unending. Tiny green hillocks protruded on both sides of the …