Flanders is an exquisite tourist destination. It is a confluence of the better parts of Europe – rich in heritage, steeped in culture, starkly modern and astonishingly trendy. Boasting of some of the finest destinations that can be explored on a cycle, on foot or along the motorway at a leisurely pace, Flanders has the best of Europe’s charm, fine gastronomic experiences and sublime beauty, making it one of the perfect destinations for a leisurely getaway.

From the under-rated beauty of Antwerp to the picture postcard-like setting of Bruges, there is much to explore and discover in Flanders. While arriving via Brussels International Airport can prove to be a slightly harrowing experience (owing to its location it is one of the busiest connection points in Europe for travellers headed across the Atlantic), the scenic beauty of the region once you hit the autostrada is starkly antithetical. A forty minute drive from the airport takes you to Bruges, the best preserved example of medieval Flanders.

Surrounded by an almost continuous ring of canals, Bruges resembles pictures that one would most likely have seen on postcards at some time or the other. Almost all buildings and houses sport the trademark gable with white trimming, lacy eye-let curtains, bright geraniums spilling out of window boxes and precisely pruned hedges. The city’s cobbled streets and awe-inspiring medieval architecture proved to be the perfect setting for Martin McDonagh’s thriller In Bruges, starring Colin Farell.

Founded in the 9th century by Vikings, Bruges appears like its frozen in time somewhere in the 1800s. Everything about the place, from the elaborate moat and its bridge to the medieval edifices, draw sighs and dreamy expressions from tourists. It seems like each brick and cobble laid here has a story of its own, some legendary, some true. Walking is the best way to discover this city — being relatively small one should be able to cover most of the sights in half a day.

Having found its way onto the list of UNESCO World Heritage Sights, the city-center of Bruges is charmingly devoid of motor vehicles, with people preferring to explore the are on foot or in a horse-drawn carriage, lending a quaint air to this doll-town. The Church of Our Lady, one of the city’s most prominent sightseeing points has a rich cache of art, its highlight being the white marble statue of Madonna with Child by Michelangelo, that is supposed to by his only work found outside Italy.

An unhurried boat ride along the canals of Bruges, fondly called the arteries of this city, will take you past secret gardens, picturesque bridges and wonderfully beautiful still-lives. The loveliest places in this quaint city ooze even more charm when admired from a boat. Three spires dominate the skyline of Bruges – the imposing Belfry, the brick tower of the Church of Our Lady and the spire of Saint Saviour’s Cathedral. Everything about the city screams of medieval opulence, of wealth and affluence so pervasive that its remnants stand strong to this day.

Due to its geographical location near the confluence of the rivers Scheldt and Leie, the city of Ghent was born. It became one of the largest and richest cities in Europe during the middle ages, but today it’s importance has been whittled down to that of a port and a busy city with a university. Until the 13th century, Ghent was the largest city in Europe outside of Paris. It served as a bustling hub of trade, given its proximity to the water, and began to decline only when the city lost its access to the sea as a result of silt.

The city, like its other Belgian counterparts, has much to offer in way of history, fine cuisine and fabulous weather. St. Bavo’s Square is to Ghent as the Trafalgar Square is to London. It is here, in the heart of the city, that the three medieval powers come together – the citizenry being represented by the Belfry, the intellect by the stately Civic Theatre and the church by the impressive St. Bavo’s Cathedral.

Inside St. Bavo’s Cathedral is the unique alter-piece titled ‘Adoration of the Mystic Lamb’ that was painted by Hubert and Jan Van Eyke in 1432. Alongside this coveted work stands a superb Rubens titled the ‘Cavalry Triptych’ and an overpowering 1745 oak rococo pulpit. The walls of the cathedral are also lined with ancient hand-scripted documents, other manuscripts and even the bishop’s robes. Right across the cathedral is the Belfry that has been on the UNESCO World Heritage list of protected monuments since 1999 and is watched over by a massive dragon. Two of the dragon’s predecessors, that were made sometime in the 1300s, both 400 kilo copper colossus, are on display in the watchman’s room at the Belfry.

Quaint wooden shorings (not bridges!) connect this sacrosanct part of the city to the main street. Along this avenue lies the Saint- Jorishof (Cour St Georges), the oldest hotel in Western Europe, where Maria of Burgundy stayed in 1477. The city is resplendent with structures depicting two main architectural styles – the flaming Gothic style of the 16th century and the much later Renaissance style.

Touches of modernism dot the ancient edifices – the graffiti street and the center for the gay community speaking highly of Ghent’s open mind and big heart. The Great Butcher’s Hall, offering much of East Flander’s specialty meats from Ganda Ham to cuberdons (cone shaped sweet gum popularly known as the Ghent Nose) and Tierenteyn’s Mustard Shop, that is more than 150 years old, trace the city’s fondness for ham and mustard way back to the times of Emperor Charles V.

While water flows in abundance in and around, it is beer that flows in abundance on the many lively pavement cafes across the city. It’s a place that has much to offer, that will appeal to the imagination of both the young and old. Its splendid facades, its timeless beauty and fine city views are considered one of the best in Europe.

Located on the banks of the river Scheldt, Antwerp is a major port and cultural metropolis, the home of famous painters and the cradle of Flemish fashion. Its innumerable hotels, restaurants, side-walk cafes, celebrated art galleries and interesting museums guarantee an exciting journey through this multi-layered city. However, it score above other parts of the Flanders region because of its edgy night-life, quirky sense of style and supreme sparkle of diamonds.

The diamond quarter, right next to the city’s central station, offers the most extensive range of diamonds and jewels. Known for their exquisite cut and flawless clarity statistics show that 7 out of 10 diamonds found in the open market come from Antwerp. Gems from numerous mines all over the world are skillfully cut and polished, praised and appraised, bought and sold here. The largest diamond showroom of Antwerp is the World Diamond Center.

A cornucopia of Belgian and world restaurants, taverns and public houses serve meals in Antwerp. The Antwerp Handjes are the best known biscuits from the City of the Scheldt. These biscuits are made of ‘sand dough’ or chocolate, with or without marzipan, in the shape of a hand. The hand is a reference to the legend of the giant Antigone who cut off the hand of anyone who could not pay toll to cross the river. He was slain by a young hero named SilviusBrabo, who cut off the giant’s hand and threw it into the Scheldt, hence giving the city its name and curious identity (throw in Dutch means ‘werpen’ and hand is ‘hand’ hence the name Handwerpen later refined to Antwerpen).

Antwerp’s Cathedral of Our Lady, dating back to 1352, is one of the finest masterpieces of Gothic architecture in all of Europe. The church, which became a cathedral in 1559, replaced a Romanesque church built in the 12th century. Its 405 feet-tall spire reigns over the city and is still the tallest building amidst its growing skyline. Despite centuries of plundering, three major works of Pieter Paul Rubens have survived and remain housed in this cathedral. The Elevation of the Cross (1610), Descent from the Cross (1612) and Resurrection Tripytch (1612), along with several more notable objects like alters, confessionals, statues and pulpits have stood the test of time and are on display at the cathedral even to date. The cathedral is also adorned by 34 stained glass windows, all speaking of live in the 12th century, medieval saints, emperors and the church.

Considered one of the budding fashion capitals of Europe, Antwerp also boasts of the brilliant Royal Museum for Fine Arts, that was built as a temple to the arts. The museum houses a large collection of paintings from the 14th century onwards, including Antwerp’s most important painters Pieter Paul Rubens, Antony Van Dyck and Jacob Jordaens.

The PlatinMoretus Museum traces the historic journey of printing and publishing through the eyes of ChristoffelPlatin, one of the world’s pioneers of this technology. The museum shows Platins’ printing offices, workshops, library and printing room, all preserved in their original state and offer insight

into living and working conditions of 1555, when Platin moved to Antwerp from France to set up his business. Some of the museum’s highlights include an original Gutenberg Bible, the world’s two oldest printing presses, original typographical matrices by Garamond and the first printed Atlas.

Rubenhuis — Many renowned painters worked in Antwerp during the city’s heyday, but Pieter Paul Rubens is undoubtedly the most famous of them. Though most of the works created by Rubens and his pupils have been scattered at museums across the world, his house in Antwerp still has many noteworthy works of art, along with furniture from the 17th century and paintings by his most illustrious pupils Jacob Jordaens and Anthony Van Dyck.

Rubens’ house was not just a studio, it was also a meeting place for the rich and famous. His clients included wealthy merchants, diplomats, aristocrats and royals who often visited his studio to see his works in progress. There is a special viewing area, for this purpose that allowed visitors to see the artists at work.

Located at the Wapper Square, Rubens bought this house when he returned to Antwerp after his eight-year stint in Italy. He carefully remodelled the house to resemble and Italiansque palazzo before moving into it in 1616. He lived and worked there till his death in 1640, after which the house was sold to a wealthy family. The city of Antwerp acquired the property in 1937 and have carefully restored it to its original glory, making it one of the most visited museums here.

Rightly called Belgium’s capital of cool and the country’s second-largest city, Antwerp revels in Europe’s history, fame and fortune making it an essential stop-over on your itinerary of the Flanders region. 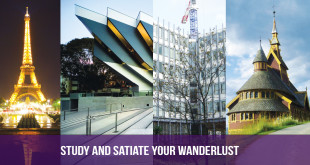 Study And Satiate Your Wanderlust

Most youngsters today, who have been bitten by the travel bug, choose to study abroad. …