A tribute to The Ugly Indians, or what we know of them

A group of anonymous volunteers who call themselves the Ugly Indians (the number is growing everyday) who feel strongly about the state of visible filth in cities across the country.

It’s time we admitted that many of India’s problems are because many of us are Ugly Indians. Look at any Indian street, we have pathetic civic standards.

We tolerate an incredible amount of filth. This is not about money, knowhow, or systems. This is about attitudes. About a rooted cultural behaviour.

The Ugly Indians believe in direct action, with a common-sense problem-solving approach. They do not blame the system. They aim to make a change from within – one that sustains because everyone wants it and is comfortable with it.

They are realists, and accept that many of India’s problems are hard to solve even if the government and public work closely together and money was freely available.

Of our many civic problems, they view the problem of visible filth on our streets as a behaviour and attitude problem that can be solved in our lifetime (or rather, immediately). This can be achieved without spending money or changing legislation or systems. It requires coming up with smart ideas to change people’s rooted cultural behaviour and attitudes. And making sure those ideas work.

The Ugly Indians have chosen to remain anonymous as the names and identities of specific individuals are not important. What matters is visible results. And any visible result in the public space needs the support of hundreds of actors (the ‘community’). One Ugly Indian in each community can, and must, take the first step – but unless the community responds positively, that step will not produce results.

Their project is as much about carrying the community along (or as is fashionable to say – ‘being ‘inclusive’) as about coming up with smart ideas that assist the process of change.

1 No lectures, no moralising, no activism, no self-righteous anger
2 No confrontation, no arguments, no debates, no pamphlets, no advocacy
3 Don’t step on anyone’s toes, don’t take sides in any ideological debates
4  Support existing systems and improve their effectiveness for the greater good
5  Basically, get real. Treat everyone with sincerity, respect and dignity first, and the greater good will be an outcome

1  It sustains in the public street for at least 90 days.
2  With no supervision.
3   Is low-cost and easy to implement and replicate
4   Changes the behaviour and attitudes of all concerned
5   Creates minimal change in the daily actions of everyone concerned (nobody should lose a job, lose a source of income, or get seriously inconvenienced – because it takes only one Ugly Indian to undo the good work of a hundred others) 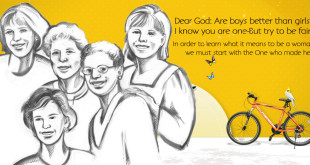 Being God’s Women in the Church

Dear God: Are boys better than girls? I know you are one – But try …