Juliet Thomas has been an integral part of several national and International Forums and Committees for more than  40 years.  She carries a passion to see women transformed and developed to be a blessing to others, all for God’s glory. 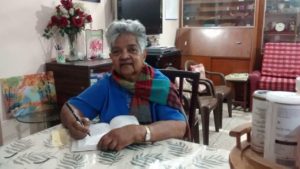 Empowerment of Poor: Since then, deeply burdened to empower poor women she started an NGO of women for women called Thara Wholistic Development of Women, in the Bangalore slums and extensively in villages in Imphal, Manipur.

Speaker and Writer: She has often written and vocally addressed women’s issues both in India and Abroad.  With her husband’s illness she is now at home doing what she can from home. Realising the need for women’s need for resource materials, she has started this website where all her materials are posted for free access and use. www.julietthomas.org.

Videos on Youtube: She has produced short Videos on topics relevant to women. Her audio messages on Prayer, recorded by Vishwa Vani will also be posted in the web.

Building Family Life: Burdened for the building  up of Family Life, in India,  she has written and  published through OM Books, Building Marriage God’s Way and Raising Children God’s Way.  Seeing marriages break up within weeks and months, she addressed this in her recent book: Preparation for Marriage, also through OM Books.

She resides in Bengaluru, India with her husband Edison Thomas, a scientist now retired. They have been blessed with two children and five grandchildren.