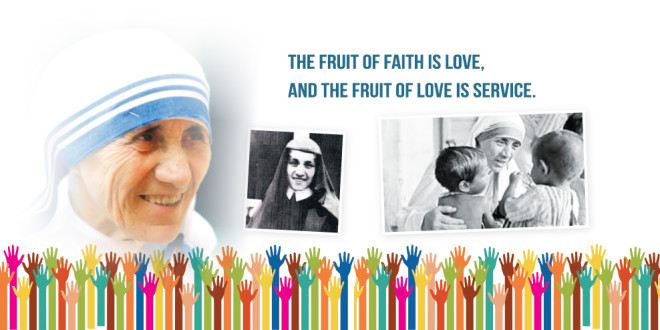 She was born in Skopje, Yugoslavia on August 26, 1910.When still young, few Yugoslav Jesuits fired her young imagination. Yet, the early seeds of her faith, determination and compassion, nurtured by her widowed mother, impelled her to leave her close-knit family, first for Ireland to join the Loreto Order of teaching nuns, (and also to learn some English), and then by boat to faraway Calcutta, which she would grow to love so much that it would become indistinguishable with her own name.

In Calcutta’s streets: She was only 18 when she was convinced that her life’s vocation lay in her becoming a missionary in far-off India: She lived and worked as a Loreto nun for close to 20 years before her true calling once again propelled her to find a way to the street, not as a lay woman but continuing to be an ordained nun. The Vatican itself gave her permission, fantastically for the first time in Church history, to step outside her secure convent into a huge and bewildering city.

Calcutta’s pavements were swarming with teeming millions uprooted by Partition, who now joined the hapless sufferers of the Great Bengal Famine of 1942-43. Here stepped in a 38-year-old nun, now dressed not in the recognisable nun’s habit, but a sari similar to what the municipal sweepresses wore, with no companion, no helper and no money. 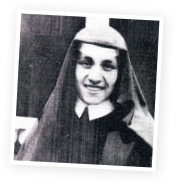 Confronted with disease, destitution and death all around her at a time (1948) when there was hardly any health-care service to speak of, she did what was to become her hallmark. Finding a man dying in the street, she took him to a public hospital, which refused to admit him, precisely on the grounds that since he was about to die, they would not waste a hospital bed on a life they said they could not save! It was only when she sat before the hospital in a dharna that they relented. The man died a few hours later. It was at this point that she began her search for a place where she could take those people whom hospitals refused; where she could nurse them — she had some medical training — and they could at least die being comforted and with some dignity. She begged various authorities and finally, an officer in the Calcutta Municipality gave her a pilgrims’ hall adjacent to the Kalighat temple, where she requested the police and municipal authorities to bring her all and any of those dying whom the hospitals refused.

Challenge of serving the Poor: She cared for those who fell by the wayside. The infant abandoned on a street, the sick and elderly turned out of their homes, often enough by their own families, the leprosy sufferers or AIDS patients that no one wanted to even go near — who would look after them? How many of us actually do anything about the desperately poor we see on the streets? We only have to look within us to know that those who are quick to criticise Mother Teresa and her mission, are unable or unwilling to do anything to help with their own hands. 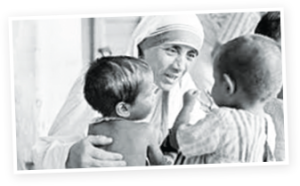 Conversion was God’s work: Although a devout Catholic, she reached out to people of all denominations irrespective of their faith, or even the lack of it. She did not believe that conversion was her work. That was God’s work, she said. So while she lifted the abandoned baby off a street full of prowling dogs for the sanctuary of her Shishu Bhawan, she would never convert her, because that child would probably be adopted into a nice Hindu household. That is why people of all faiths were so accepting of this frail, diminutive Catholic nun.

Mother Teresa was always her own person, startlingly independent, obedient, yet challenging some preconceived notions and expectations. Her own life story includes many illustrations of her willingness to listen to and follow her own conscience, even when it seemed to contradict what was expected.

To the  many harsh critics Mother Teresa short response was: “No matter who says what, you should accept it with a smile and do your own work”.

Her Declining years: Until her death in 1997, Mother Teresa continued her work among the poorest of the poor, depending on God for all of her needs. Honours too numerous to mention had come her way throughout the years, as the world stood astounded by her care for those usually deemed of little value. In her own eyes she was “God’s pencil—a tiny bit of pencil with which he writes what he likes.”

Despite years of strenuous physical, emotional and spiritual work, Mother Teresa seemed unstoppable. Though frail and bent, with numerous ailments, she always returned to her work, to those who received her compassionate care for more than 50 years. Only months before her death, when she became too weak to manage the administrative work, she relinquished the position of head of her Missionaries of Charity. She knew the work would go on.

Finally, on September 5, 1997, after finishing her dinner and prayers, her weakened heart gave her back to the God who was the very centre of her life.

“At the end of our lives we will not be judged by how many degrees and awards we received, how much money we have made, or how many great things we have done.

But we will be judged by: “I was hungry and you gave me to eat. I was naked and you clothed me. I was homeless and you took me in.”

Excerpted from various biographies on life work of Mother Teresa

Her life – A Challenge to us
As we rethink, and renew our vision, goals, let us take lessons from Mother Teresa’s dedicated  life of selfless service and sacrifice, so we too will renew the community around us  with hope, peace and joy